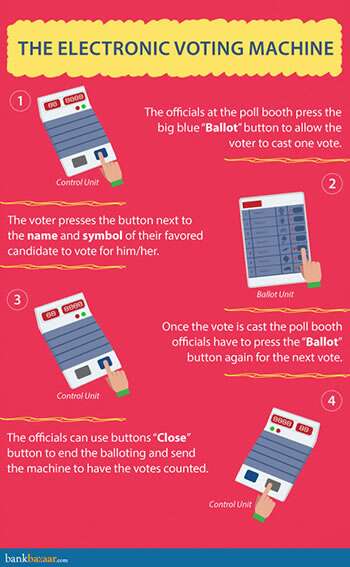 EVM stands for Electronic Voting Machine. These machines have been used in the elections since 1999 paving the way for electronic voting. EVMs are used in both the General and State elections of India. For first-time users, staring at an EVM can be daunting if you don’t know what to do. But for both first-time users and experienced users, knowing the working behind an EVM is important.

The Design of EVMs

An EVM is designed with two units: the control unit and the balloting unit. These units are joined together by a cable. The control unit of the EVM is kept with the presiding officer or the polling officer. The balloting unit is kept within the voting compartment for electors to cast their votes. This is done to ensure that the polling officer verifies your identity. With the EVM, instead of issuing a ballot paper, the polling officer will press the Ballot Button which enables the voter to cast their vote. A list of candidates names and/or symbols will be available on the machine with a blue button next to it. The voter can press the button next to the candidate’s name they wish to vote for.

The machine is also designed to overcome the rampant electricity problems in the country. To ensure uninterrupted voting, the machines run on 6V alkaline batteries that are manufactured by Bharat Electronics Limited, Bangalore and Electronics Corporation of India Limited, Hyderabad. This enables the machines to run independently without power supply and also eliminate the possibility of electric shocks.

In order to cast your vote, you must present your Voter ID and your name should appear in the Electoral Rolls. The officer in charge will then press a button that enables you to vote. You can then enter the polling booth and cast your vote. Once you have pressed a button to vote, your vote is recorded. Pressing the button again, how many times you want, will not record another vote. The machine will be locked till the officer in charge sends in the next voter and enables him to vote. This ensures one person equals one vote.

Once the last voter has cast their vote, the officer in charge will press a button labelled “Close”. The EVM will not accept any votes after this. The Balloting unit will be disconnected from the Controlling unit and both units will be kept separately.

After the polls are closed, the presiding officer will give each polling agent the accounts of the recorded votes. After counting votes, the account of voters registered will be tallied against the votes counted. Any discrepancies can be pointed out by the counting agents. After the counting, the Results button can be pressed to display the result.

There is also a safety measure provided to prevent the result button from being pressed before the counting of votes begins. The button cannot be pressed till the “Close” button is pressed. The button is also sealed and hidden inside. This can be accessed only at the counting center in the presence of an officer designated to this task. With these measures and features, the EVMs can be sealed and the votes can be counted on a later date even weeks or months after collecting the polls.